An Overview of Dementia Today

According to the World Health Organization (WHO), more than 47 million people in the world suffer from dementia, with close to eight million new diagnoses annually. Dementia is classified as a major neuro-cognitive disorder, as it interferes with not only cognitive function but also the ability to complete activities of daily living. Memory, speech, language, reasoning and judgment are all impaired as part of dementia, along with THE ability to do everyday tasks, like cooking, dressing, driving and more.

While there is no cure for dementia, treatment options are available that can help slow the progression of the disease and improve overall quality of life.

The goal of any dementia treatment plan is to improve or maintain quality of life for the individuals while maximizing their ability to complete daily living tasks. It’s important to get diagnosed as early as possible, as sometimes, the initial symptoms even can be reversed with proper treatment. Or, worsening of symptoms can be temporarily slowed.

The first step in treating dementia is discovering what the underlying cause may be. Dementia occurs when there are changes or damage to the brain, like through Alzheimer’s disease. Or, dementia can be caused by a stroke, which is known as vascular dementia. Other causes of dementia include Parkinson’s Disease, dementia with Lewy bodies, or a severe head injury.

The second step is to determine the symptoms, as well as the severity of those symptoms. However, there are different types of symptoms to consider as part of the treatment plan:

Physical symptoms: Physical or muscular symptoms are often treated through the use of medications for Parkinson’s disease, although these tend to carry unwanted side effects.

It’s also important to match the dementia treatment to the stage of the disease. While the symptoms themselves can vary by the individual, dementia is a progressive disease, which means there are common stages each individual will go through. Treating the specific stage of dementia is a more person-centered approach that also focuses more on what the individual is still capable of doing, rather than what they can no longer do.

Recently, new research in dementia treatment led to discoveries for alternative forms of treatment and therapy. For instance, researchers have found that diabetes medications like Victoza can help build up beta-amyloids in brain cells. Or, common cholesterol medications called statins may actually help prevent the onset of dementia.

There are also some natural remedies like coconut oil, which can restore the lining of the nerves and boost communication in the brain, improving overall functions. Vitamin B12 can also contribute to improved brain function, as it helps restore nerve passageways in the brain.

Non-medication treatments for dementia include innovative therapies such as music therapy, pet therapy, speech and language therapy, and even exercises like yoga. Plus, keeping your brain active through mental games can slow some of the symptoms.

If your loved one begins showing any of the common signs of dementia, it’s important to start thinking about future needs sooner than later. Involve loved ones in the planning process so their options can be heard and considered. Learn as much as you can about dementia and how you’ll be able to manage issues as they arise; start researching the options for memory care or assisted living communities in your area. 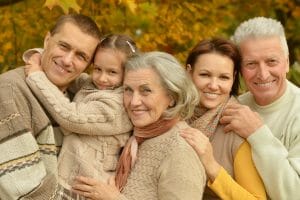 Fall Activities to Enjoy with your Senior Loved Ones

ASC Teams up With CICOA to Aid Seniors at Home

The Expanding Role of Virtual Reality in the Lives of Seniors