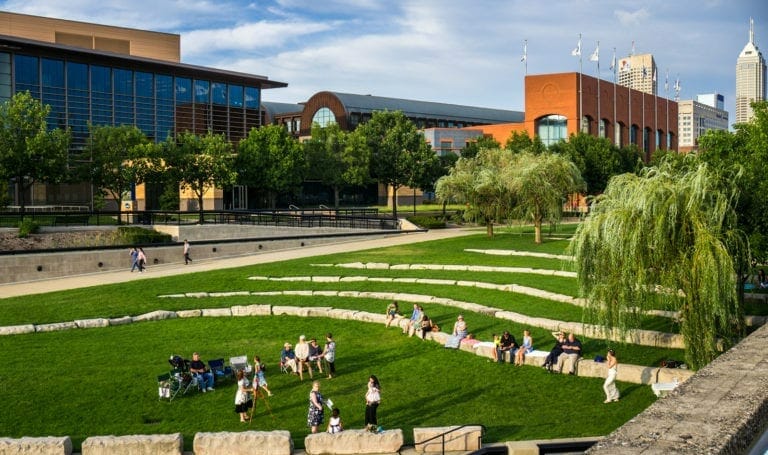 Situated on 250-acres right in the heart of downtown Indianapolis, White River State Park offers year-round events and activities that attract thousands of locals and tourists to the city. Not only does the park offer beautiful greenspaces, trails and waterways to enjoy a lovely day outside, but the urban getaway also features cultural, educational and recreational events and attractions.

All About White River State Park

White River State Park is the nation’s only cultural urban state park. In 1979, the Indiana General Assembly created the White River State Park Development Commission, which operates outside of the state park system and Department of Natural Resources. This was done so the Commission could build the park without some of the restrictions placed on state agencies; they wanted to create a space unlike any other in the country.

In 1988, the Indianapolis Zoo became the first attraction in the park. Shortly after, the Eiteljorg Museum of American Indians and Western Art opened its doors. More Indianapolis attractions soon followed, such as Victory Field, home to the Indianapolis Indians, the state’s largest IMAX® theater, the NCAA® Hall of Champions Museum and much more.

Things to do at White River State Park this Spring

As spring brings warmer, milder weather, there’s no better time to get over your cabin fever by heading to White River State Park in downtown Indianapolis.

Float along the Central Canal. Drift down the 1.5-mile Central Canal while enjoying views of the Indianapolis skyline in a pedal boat or a kayak. Or, better yet, let someone else do the work while you enjoy a gondola ride from a costumed gondolier.

Visit the zoo and gardens. The Indianapolis Zoo is a 64-acre zoological park, aquarium and botanical garden—the only zoo in the United States to have this triple accreditation. Spend the day learning about the many different ecosystems in our world, visit the animals or stroll through the gardens that are sure to please your green thumb.

Do some museum hopping. Two of the city’s premiere museums are located at White River State Park: the Eiteljorg Museum and the Indiana State Museum. The Eiteljorg contains one of the best Native American and Western art collections in the world, while the Indiana State Museum showcases science, art and culture that celebrates Indiana’s rich history, as well as the state’s present and future.

Attend a concert on the lawn. According to Pollstar, The Farm Bureau Insurance Lawn at the park is one of the top 100 outdoor music venues in the country and features a wide array of talented artists every year. The venue is celebrating its 14th anniversary in 2017, and the concert season gets into full swing starting in May.

American Senior Communities offers a variety of senior healthcare services throughout our locations in Indianapolis and surrounding areas. Contact us today to request more information.