All About the Indianapolis Motor Speedway 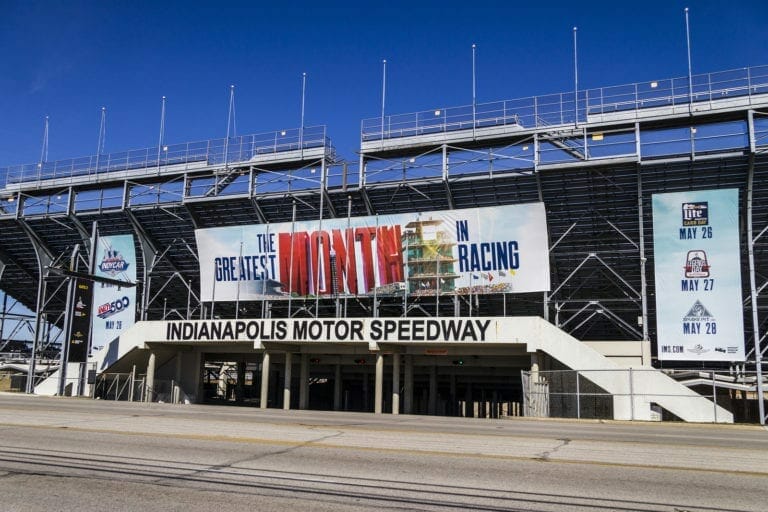 Memorial Day weekend is just a few weeks away, and Indianapolis residents and racing enthusiasts across the country know what that means: It’s almost time for the Indianapolis 500. Dubbed The Greatest Spectacle in Racing, the Indy 500 is part of The Triple Crown of Motorsports, which also includes the Monaco Grand Prix and the 24 Hours of Le Mans. The event is not only the most prestigious event of IndyCar racing, but also is known as the largest single-day sporting event in the entire world.

The Indy 500 has been held at the Indianapolis Motor Speedway for over 100 years now. And, the track has been called the “greatest race course in the world,” hosting not only IndyCar racing, but also a wide variety of special events like concerts and festivals throughout the year.

Today, the Indianapolis Motor Speedway has an official, permanent seating capacity of around 235,000, making it the highest-capacity sports venue in the world.  But, it took quite some time for it to grow so large!

In 1906, Indiana automobile dealer Carl Fisher proposed an idea to build a private auto testing facility to better determine the top speeds of the cars on the road back then, and his idea was that these races would bring the spectators into the car showrooms to get a better look. Three years later, the Indianapolis Motor Speedway got its humble beginnings on 328 acres of farmland five miles northwest of downtown Indianapolis. When the crowds at those first races began declining, it was decided to hold a single, longer event just once each year. In 1911, the first Indy 500 was held, becoming an immediate hit and drawing attention from all over the country.

While racing cars was always the intention, the first event held at the Indianapolis Motor Speedway was actually a helium balloon race! In 1909, two months before the track was totally completed, nine gas-filled balloons lifted off at Indy, all hoping to win trophies. The winning balloon landed over 380 miles away in Alabama. The second event at the racetrack was a series of seven motorcycle races, which were forced to end early due to concerns over the condition of the track. Later in 1909, the surface of the track became a major problem during the first automobile races, with drivers being covered in mud and tar, and potholes forming at all the turns.

This is why it was determined an alternative surface was needed. Paved roads were not yet popular in 1909, but bricks proved to greatly improve traction of the cars. Thus, the nickname “the Brickyard” was born. Today, only three feet of the original bricks remain at the start-finish line.

Various improvements to the track took place over the years, from replacing the bricks with tarmac in the 1930s and major repairs to the dilapidated site following World War II, to the final paving over the remaining bricks in 1961.

Last year, the Indianapolis Motor Speedway presented the historic 100th Running of the Indy 500. The Centennial Era of the Indianapolis 500 was celebrated between the years of 2009-2011, when a variety of special events and festivals were held to honor the 100-year-old racing tradition. Race enthusiasts from around the world are already anxiously awaiting this year’s Indy 500! Practices began this week, and are open to the public. The actual race will be held on Sunday, May 28.

American Senior Communities offers a variety of senior healthcare services throughout our locations in Indianapolis and surrounding areas. Contact us today to request more information.