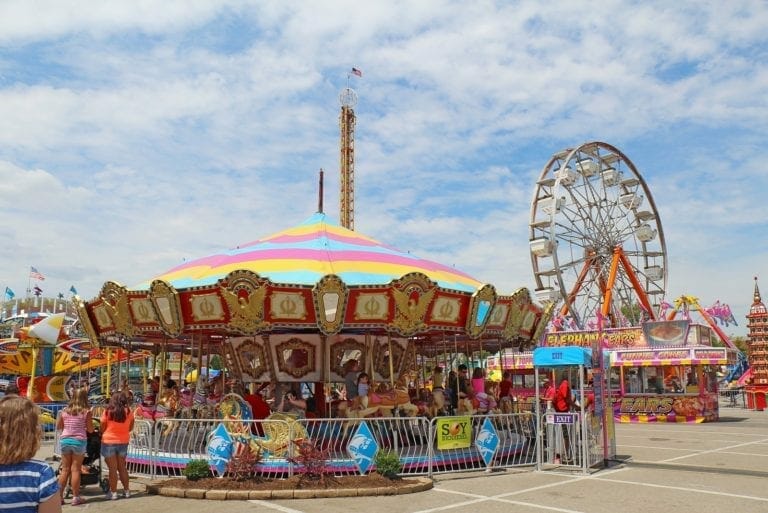 Each August, the Indiana State Fair takes place for 17 days at the Indiana State Fairgrounds in Indianapolis. Next to the Indy 500, it’s one of the top events in the area, dating all the way back to 1852 when the first fair was held. 2016 marks an exciting and momentous year for the state fair, as fair-goers and exhibitors will not only enjoy all the regular festivities the fair brings, like delicious food, fun rides, free concerts and more, but also will celebrate Indiana’s Bicentennial.

The History of the Indiana State Fair

In February of 1851, the General Assembly created the State Board of Agriculture here in Indiana in order to monitor the agricultural industry. One of the Assembly’s first orders of business was to create a state fair, and the first Indiana State Fair was held in October of 1852 at what is now Military Park in downtown Indianapolis. This first year saw around 30,000 visitors, who each paid an admission fee of 20 cents to check out over 1,300 exhibits, which mostly featured agricultural products and machinery. In fact, Indiana was only the sixth state in the entire country to host a state agricultural fair at the time.

In 1892, the fair moved to its current site at 38th Street and Fall Creek Parkway after being held in several other cities throughout the region; it was found that attendance was highest when the fair was located in Indianapolis. The Indiana State Fair has always focused on agriculture, but over the years exhibits showcasing advances in science, technology, automobiles, and more emerged.

Along with the many innovative exhibits, another main source of entertainment at the Indiana State Fair has been music. From local Indianapolis musicians to huge national acts like the Beatles (who sold out two shows to over 30,000 screaming fans at the fair back in 1964), music has always been an integral part of the event.

What’s New at the Indiana State Fair in 2016

There are several county fairs in Indiana, but the Indiana State Fair is undeniably one of the biggest events in the state. It’s considered an institution that Hoosiers near and far plan to attend annually. This year, the fair will take place from August 5 through August 21, and has a few new features, like the Indiana State Fair app that will allow fairgoers to plan their entire visit from start to finish. The fair also offers a new way to experience some amazing food from the vendors, with the “Taste of the Indiana State Fair Contest,” during which participants will create food rich in Indiana history to be voted on by fairgoers via the app.

Of course, like every year, the fair offers a wide variety of free things to do that the entire family will enjoy. In honor of Indiana’s 200th birthday, this year the fair is offering a total of 200 free things to do! From viewing the beautiful colors of the Hot Air Balloon Glow on August 5th to watching an exhilarating jousting competition at the Hoosier Lottery Grandstand on August 14th and exploring the Wonder Trail, the Indiana State Fair truly offers something for everyone in 2016.

Plus, don’t miss all the free concerts! This year, performers include national acts like The Fray, Blues Traveler, 38 Special, Night Ranger and many, many more!

What’s your favorite memory of visiting the Indiana State Fair?