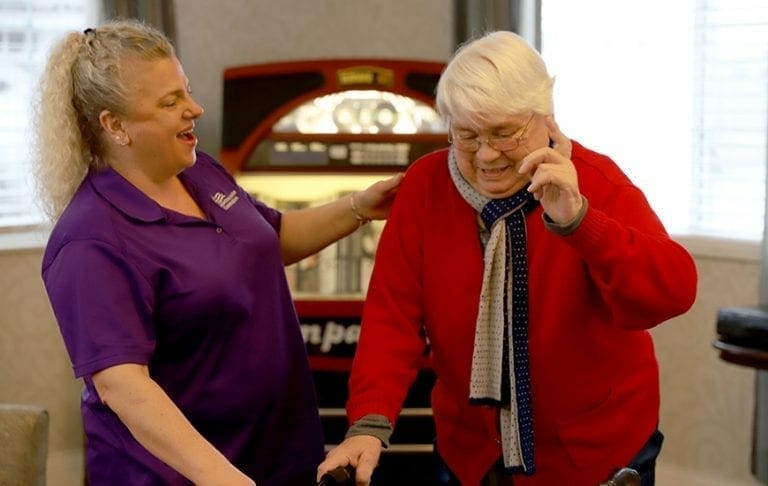 We know that due to the changes that occur in the brains of individuals living with various forms of dementia,“moments of upset” can be a common occurrence for those affected. In the past couple of decades, the easy answer to “manage” these moments was to call up the person’s physician and request a medication to help calm or tranquilize the person. The problems with many of the prescribed medications, however, is that some have side effects that can be very harmful to elders and those living with various dementia diagnoses. Falls, increased confusion, excessive sleepiness and even an increased risk of death have been associated with some of the medications used to “manage” complex behavioral expressions in those living with dementia.

Fortunately, some pioneering Alzheimer’s and dementia care advocates in the mid 1990’s saw that medication management was not the only way to assist affected individuals through moments of anxiety, frustration or upset. Rather, they were able to demonstrate the more holistic approaches that promote a better quality of life, with fewer risks for those challenged by the emotional aspects of a dementia journey often reduced the need for medications. A few of these approaches are discussed below.

According to the Mayo Clinic, “Research suggests that listening to or singing songs can provide emotional and behavioral benefits for people with Alzheimer’s disease and other types of dementia. Musical memories are often preserved in Alzheimer’s disease because key brain areas linked to musical memory are relatively undamaged by the disease.” This means that offering music regularly to affected individuals may create a more positive mood state by providing memories recalled via musical memories that still strongly remain. Generally, music that was a favorite of the individual in their late teens/early 20’s will be the music that carries the strongest emotional connection. Pre-loading an MP3 player with this preferred music, encouraging sing-along’s, or playing such music on a stereo are all ways to help an affected person maintain or regain a more positive emotional state, in many cases. Adding some reminiscent discussion about the memories recalled from the music is also a way to deepen the positive emotions created.

For those who love animals, interacting with pets can be a great source of joy. This is no different for those living with a diagnosis of some form of dementia. Pets have been shown to lower our heart rates and blood pressure, calm anxiety, reduce pain and generally promote a feeling of well-being. Often, pets are removed from the world of those living with Alzheimer’s or related forms of dementia due to fears that the person will not be able to properly care for the animal, or due to a move to an environment that will not accommodate residents’ pets. The total removal of pets from the lives of those who love animals may significantly diminish their quality of life and could in some instances cause a great deal of sadness or distress. For those who love animals, or for whom pet ownership has been an important part of their lives, we recommend continued exposure to animals in some way. Pet therapy visits, visits to or volunteering at local shelters, visits with well-mannered pets of friends/family members or even considering continued pet ownership with proper oversight from others, may all well serve the affected person. If such live interactive experiences are not possible, then life-like robotic pets such as Joy for All robotic cats and dogs by Hasbro have been shown to provide positive benefits for those living with dementia as well.

Like aspects of music mentioned earlier, it is also known that tapping into the expressive or artistic side of brain avoids the language center already potentially damaged by dementia. The end result is that through artistic means, those living with dementia might find continued ways to express themselves that do not rely on verbal methods. Instead, the person might find a way to communicate feelings through paint, clay, colored cloth, etc. According to Dr. Bruce Miller of the University of California, San Francisco, “We think that in patients with language loss, the visual side of their brain stops being inhibited by the verbal side and that allows their visual creativity to be released,” says Miller. “We have evidence now from functional imaging that it’s actually happening.” By finding alternative ways to encourage affected individuals to express themselves, we may be able to prevent some moments of frustration, help them to continue to have a “voice” for their emotional states and assist them to return to a place of calm when the world becomes too demanding.

The holistic methods mentioned above, and many others, are an everyday part of the approaches offered within American Senior Communities’ Auguste’s Cottage Memory Care neighborhoods. Such interventions assist in potentially decreasing psychoactive medications while increasing quality of life for all those partake of such opportunities.