The Story of Auguste Deter 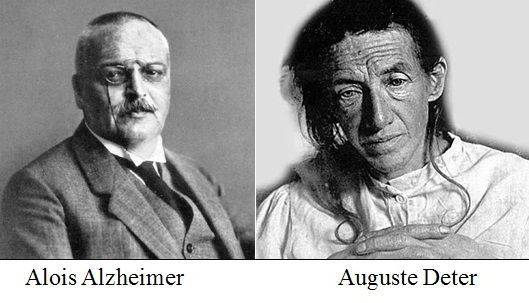 Such was the response Auguste Deter would continually give when asked questions she could no longer answer.

Auguste Deter was the first person officially diagnosed with Alzheimer’s disease. Born in 1850, Deter first started showing signs of the disease when she was only in her early 50s. Her loss of memory, trouble sleeping and problems with language and writing were all symptoms of dementia, but she was very young to be displaying them.

Auguste first began showing signs of illness with the delusional thought that her husband was being unfaithful. This unwarranted jealousy directed at her husband, along with other symptoms such as memory impairment and disorientation even while in her home grew to be too much for her husband to handle. He brought her to the Institution for the Mentally Ill and Epileptics in Frankfurt, Germany, on November 25, 1901.  It was here that Auguste met Dr. Aloysius “Alois” Alzheimer, a German psychiatrist and neuropathologist.

Dr. Alzheimer became fascinated with Deter’s condition, initially diagnosing her with presenile dementia.  Alzheimer asked Auguste questions that were similar to those that would be asked by a doctor today who was screening for the disease named for him. When asked what her name was, she would respond “Auguste”, but then when asked what her husband’s name was, she would give her own name again. While she had the ability to recognize and name some objects, like a pencil, a key, a cigar, when asked what she was eating she would reply “spinach” even though she was eating pork.

Auguste also displayed memory issues. When objects were shown to her, she would not remember what objects she had just seen after a brief amount of time. Also, in the evenings her condition seemed to deteriorate even further. Her speech would become confusing, and she would even wake up screaming in the middle of the night.

During her 5-year stay at the institution, her condition worsened to the point where she lost almost all cognitive ability. On April 8, 1906, at age 55, Auguste passed away.

Dr. Alzheimer, who by this time had moved on to the Royal Psychiatric Clinic in Munich, heard of Deter’s passing and requested that her brain and medical records be sent to him for examination. His findings of her brain revealed abnormalities and extensive atrophy in the cortex- the outer layer that is responsible for memory, language, judgment and thought in general.  While these findings were not unusual, it was Deter’s age that made them remarkable. Previously these abnormalities were seen only in patients in their seventies.  Auguste’s condition sparked the beginning of the world’s understanding of memory loss.

At American Senior Communities, we have created a special memory care program called Auguste’s Cottage, which focuses on the social model philosophy of care. We focus on maintaining a home-like environment that is secure, yet gives residents a sense of belonging. Auguste’s Cottages are located throughout the state.